Infiniti's big, handsome, and upscale QX80 SUV offers room for the whole family but isn't quite as luxurious or as well rounded as its more premium rivals.

A V-8 engine is standard, which sets the QX80 apart from competitors such as the 2020 BMW X7 and the 2020 Mercedes-Benz G-class, and buyers can choose from rear- or all-wheel drive.

The QX80's roomy cabin can be outfitted with seven or eight seats, all of which offer a good amount of cushioning and genuine leather upholstery.

Plus, Infiniti provides many driver-assistance features for no additional charge. But the value proposition suffers a bit when you consider that the Nissan Armada, from which the QX80 derives, can be spec'd with nearly as many luxuries as the Infiniti.

The QX80 boasts attractive styling and luxury-brand cachet, but there are more compelling offerings out there.

Infiniti has reconfigured the QX80 lineup to include a new mid-range Premium Select trim and a high-end Sensory model for 2021. It also added standard driver-assistance features such as adaptive cruise control and lane-keeping assist.

The Sensory model is the most luxurious and comes with chrome bits on the outside, quilted semi-aniline leather upholstery and burl-wood trim on the inside, a hydraulically controlled suspension, and a large rear-view mirror that doubles as a digital display for a rear-facing camera.

Given the Sensory model's price brushes elbows with that of the new GLS-class and a well-optioned X7, I'd stick with the Luxe model.

The 400-hp 5.6-liter V-8 and seven-speed automatic transmission launches the three-ton Infiniti to 60 mph in 5.9 seconds.

While that's speedy given this SUV's size, every other competitor are even quicker. Still, around town, this Infiniti gallops with grace, its exhaust note growling after heavy-footed accelerator applications.

A comfortable ride couldn't make up for the fact that the QX80 felt less athletic than the GLS450. So if you're looking for a mega-luxury SUV with sharp driving dynamics, you should look elsewhere; the Infiniti's serene character will satisfy buyers who want to be coddled.

The QX80 can tow 8500 pounds in either the rear-wheel-drive or all-wheel-drive configuration, which beats the Mercedes's rating by 1000 pounds.

While the Infiniti's interior is comfortable and quiet, the design has barely changed since the ute debuted in 2011 as the QX56.

Likewise, features that I've come to expect on luxury vehicles (such as a panoramic sunroof, massaging seats, and a head-up display) aren't available.

Still, the spacious cabin is well built and includes a standard third row. While the QX80 can accommodate adults back there, several competitors offer roomier setups.

The Infiniti has standard second-row captain's chairs that can be swapped for a three-seat bench.

Those who can't find enough space to store their property inside the QX80 should appear on an episode of Hoarders.

The Infiniti has ample interior cubby space, and it carries the most luggage behind the third row among similar-size rivals.

While the screens are responsive and a mobile hotspot is available without spending a fortune, every luxury competitor has a better interface and features. The QX80 comes with 12-volt outlets and four USB ports.

The optional Theater package adds another USB port and a 120-volt outlet. It also includes the rear-seat entertainment system, consisting of two 8.0-inch screens fitted to the back of the front-seat headrests.

The QX80 earned a four-star crash-test rating from the National Highway Traffic Safety Administration (NHTSA) but has not been evaluated by the Insurance Institute for Highway Safety (IIHS). 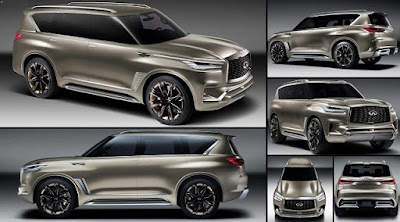 The QX80 has a competitive warranty that's highlighted by the longest limited coverage and corrosion protection in its class.

Unfortunately, Infiniti doesn't offer the complimentary scheduled maintenance that most competitors do.